Stephanie, a special needs teacher and musician from St Lo, Normandie stayed here for a week.  She is looking for alternative ways of living ... of being closer to nature ....

Some images from her stay: 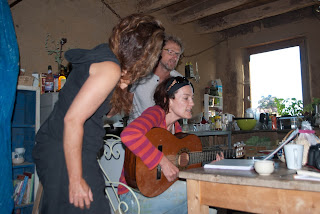 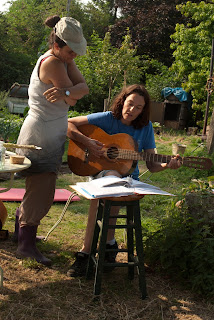 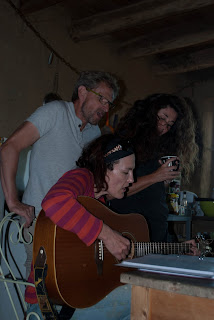 Posted by Liza Sweeting at 17:43 No comments:

Winter vegetables to sow or plant in September onwards


10 vegetables to grow over winter

Up until the end of October there is a good range that can be sown to supplement the leeks, parsnips and sprouts that should already be settled in.


Except for garlic, onion sets, asparagus and cabbages, you can sow in pots in a cold frame or greenhouse and plant out as mini-plants a few weeks later.


Alternatively, sow outside and cover with fleece or perforated polythene.
1 Broad beans


They are ready a good month earlier than those sown in April, and they don't get black fly. If the beans are in an exposed position and grow too tall (above a foot ) over winter, they can wave around and split just above ground level, so put in canes or sticks and string if necessary.


If you pick out some tops to cook before the pods are formed you will delay pod production, which can help stagger your crop. Small pods are delicious cooked and eaten whole.

You do wait for two years before you can cut them, but it is a small price to pay for a gourmet extravaganza.

For a late spring crop, it's worth trying sowing seeds now, especially in mild areas. If you sow direct into the ground, plant them one inch deep and relatively closely at about one inch apart, to make up for a higher loss rate.


Plant in groups of three lines all 12in apart to form thick rows, and make each thick row 18in apart.


Pea shoots are tasty: just pick off the tips and add to stir fries and salads.  Meteor is a first early variety and overwinters well. To speed up germination, put seeds on a wet kitchen towel on a plate and sow (in modules) when the root starts to develop.


Plant peas in groups of three lines all 12in apart Alamy

This is the easiest crop to grow. Plant the cloves individually to a depth of 2.5in deep on light soils and a lot less deep on heavy soils, but always a minimum of one inch below the surface.


The distance should be about one foot apart each way. If you suffered from rust this year, in addition to rotation try hoeing in sulphate of potash in February/March.

There are quite a few varieties of onions from sets that can go in now. This is the easiest way to grow onions, and they can be harvested earlier on in the year.


Plant shallots in December or after Christmas

This is a good filler: it's undemanding, easy to grow and useful for bulking out the salad bowl.


It is useful in that it does not need high light levels and tolerates low temperatures, and so can be sown up until the end of October outside; it can be picked until December or into the new year with some fleece or milder weather.


It can be a cut and come again or left as a singleton. If you are short of space, you could broadcast some in between your spring cabbage plants.


This is another vegetable that is very popular now.
Great in salads, too. Useful varieties that will tolerate being sown now until the end of October are Riccio d'Asti and Merlo Nero (Seeds of Italy). The big advantage of autumn sowing is that there is no tendency to bolt.


Although not usually known for sowing now there are slower growing varieities for over winter to produce a crop of smallish, edible pods earlier next year.

Plant 12in apart each way and earth up the soil around their stems after they have got going to help them against the cold. If it gets icy in colder areas, fleece or cloches can help.


You can thin early plants for spring greens and leave the rest to heart up. Watch out for pigeons.
Posted by Liza Sweeting at 16:41 No comments: