Jean Michel and Arnaud, two forest fire fighters from Quebec stayed here for a week.  They are on an extensive tour of Europe - with a limited budget they are doing a lot of hitchiking, couchsurfing and wwoofing.  They were keen to learn about living off the land, permaculture and self-sufficiency and brought great skills and enthusiasm to the project.

Some images from their stay: 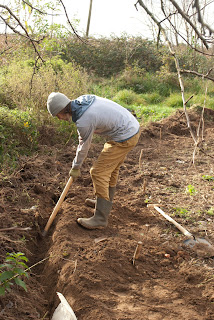 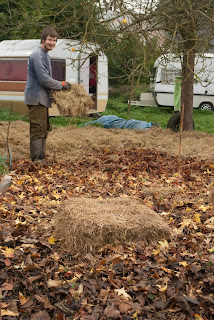 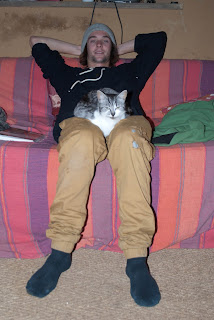 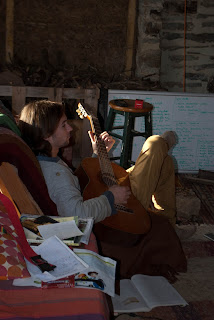 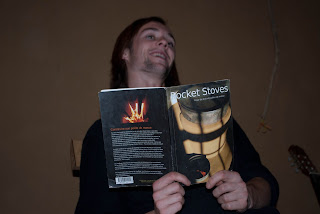 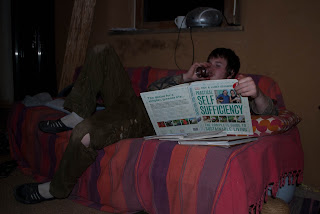 Posted by Liza Sweeting at 11:13 No comments:

Ariana stayed for a couple of weeks in November this year.  She is an 18 year old from North Carolina who is deeply involved in the climate justice movement.  She brought her sharp intelligence and enthusiasm for learning and threw herself into every activity on offer.

She will be attending the climate negotiations with the Sierra Student Coalition at the end of November in Paris.  She has done activism trainings with the Sierra Club as well as with her Quaker high school (the Carolina Friends School).  She will be studying at Clark University, Massachussets next year to do Environmental Studies.

Some images from her stay:

We are working on the kitchen at the moment - putting a lime render on the earth wall before building units .....

One of the many reasons for my decision to come to France to create this eco-site is my concern about the issue of climate change and the associated question of how we can 'tread lightly on the earth'.  I have been aware of the debates for some years but feel motivated to write a little about this here after talking extensively with a young wwoofer who is staying here at the moment. Ariana is a climate activist from the United States who will be attending the climate negotiations in Paris taking place at the end of November this year.

Climate change: How do we know?


The Earth's climate has changed throughout history. Just in the last 650,000 years there have been seven cycles of glacial advance and retreat, with the abrupt end of the last ice age about 7,000 years ago marking the beginning of the modern climate era — and of human civilization. Most of these climate changes are attributed to very small variations in Earth’s orbit that change the amount of solar energy our planet receives.


Scientific evidence for warming of the climate system is unequivocal.
The current warming trend is of particular significance because most of it is very likely human-induced and proceeding at a rate that is unprecedented in the past 1,300 years.1


Earth-orbiting satellites and other technological advances have enabled scientists to see the big picture, collecting many different types of information about our planet and its climate on a global scale. This body of data, collected over many years, reveals the signals of a changing climate.
The heat-trapping nature of carbon dioxide and other gases was demonstrated in the mid-19th century. Their ability to affect the transfer of infrared energy through the atmosphere is the scientific basis of many instruments flown by NASA. There is no question that increased levels of greenhouse gases must cause the Earth to warm in response.

Ice cores drawn from Greenland, Antarctica, and tropical mountain glaciers show that the Earth’s climate responds to changes in greenhouse gas levels. They also show that in the past, large changes in climate have happened very quickly, geologically-speaking: in tens of years, not in millions or even thousands.


All three major global surface temperature reconstructions show that Earth has warmed since 1880.  Most of this warming has occurred since the 1970s, with the 20 warmest years having occurred since 1981 and with all 10 of the warmest years occurring in the past 12 years. Even though the 2000s witnessed a solar output decline resulting in an unusually deep solar minimum in 2007-2009, surface temperatures continue to increase.


The oceans have absorbed much of this increased heat, with the top 700 meters (about 2,300 feet) of ocean showing warming of 0.302 degrees Fahrenheit since 1969.
4) Shrinking ice sheets


Both the extent and thickness of Arctic sea ice has declined rapidly over the last several decades.
6) Glacial retreat


Glaciers are retreating almost everywhere around the world — including in the Alps, Himalayas, Andes, Rockies, Alaska and Africa.


Since the beginning of the Industrial Revolution, the acidity of surface ocean waters has increased by about 30 percent. This increase is the result of humans emitting more carbon dioxide into the atmosphere and hence more being absorbed into the oceans. The amount of carbon dioxide absorbed by the upper layer of the oceans is increasing by about 2 billion tons per year.


Satellite observations reveal that the amount of spring snow cover in the Northern Hemisphere has decreased over the past five decades and that the snow is melting earlier.

For some answers to frequently asked questions refer to http://www3.epa.gov/climatechange/basics/facts.html

The effects of climate change:

Posted by Liza Sweeting at 09:53 No comments: