Buying a house and land in Normandy France


Buying a House and Land


I finally made a commitment to buy a house that I had seen at least four times over a period of five months.  Although I had always been drawn to the place, I had initially felt overwhelmed at the amount of work that needed doing.  On the positive side, it was near my sister and her family, it was tucked away in the countryside and hence quiet and it had a fair amount of land.  Some of the negatives included half an asbestos roof, 50 concrete rabbit hutches and a plethora of overgrown laurel and pine trees that created rather a spooky atmosphere.

I eventually plucked up the courage and made an offer which was accepted after a short scuffle of negotiations.  I was then obliged to wait a few months for all the necessary administrative procedures.  I spent my time productively participating in straw bale and ecological house volunteering projects, teaching gardening in a school and volunteering for various ecological projects through WWOOF or word of mouth.

I moved in to the house in July 2012.  My friend Jean Francois spent the first evening there with me.  We cooked over a fire that we made outside and chatted as the rain fell lightly. 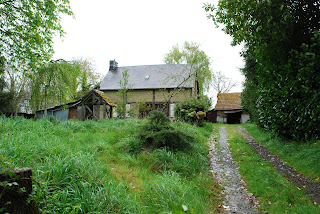 Above:  A torchis house (wattle and daub) in serious need of renovation
The first few months were spent toing and froing to the local recycling centre with the enormous quantities of rubbish left by the previous owner.  The two rooms that make up the first floor under the roof were filled with an endless assortment of old clothes stuffed into bags, old books and papers, glass and scrap metal.  It took a week to clear the attic and many more to clear the piles of rubbish (mostly plastic and metal) that I discovered under bushes around the land. 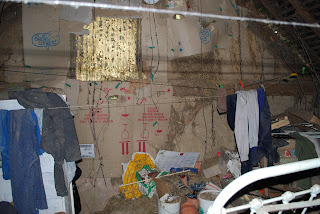 Above: Rubbish that had been piled up in the attic

The next challenge was what to do with the 50 odd concrete rabbit hutches scattered around the land (the previous owner had bred rabbits for a living).  I discovered that there is a demand for these in Normandy as raising rabbits for eating is a popular past-time.  An advert in a website called 'Le bon coin' resulted in a flurry of requests, visits and offers to buy these horrific structures.  By October they had all gone.  I found a company nearby that bought the huge amounts of corrugated iron that had served as roofing for them. 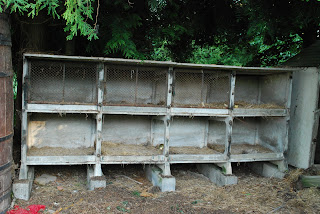 Above: Concrete rabbit hutches that littered the land. 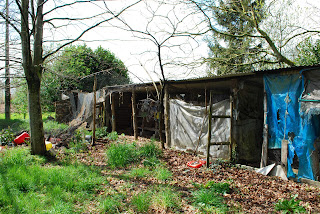 Above: The hutches encased in corrugated iron and plastic 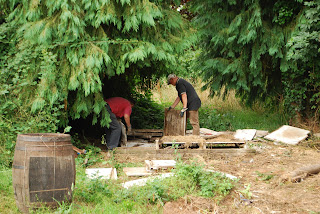 Above: Local Normands dismantling the concrete hutches before taking them away.
Posted by Liza Sweeting at 14:02