So this house has no toilet or sewage system at the moment.  I have fabricated a temporary dry toilet using one of the old wooden barrels that was originally used as a bird cage.   I got the idea from a neighbour who is an organic cow farmer. I bought a decorative plastic cover to go over the metal grating that is the door and used an old chair that was here, lifted off the seat and bought a plastic bucket that miraculously fitted exactly into it and popped a wooden toilet seat on top.  The roof is covered with a sheet of plastic nailed around the rim: 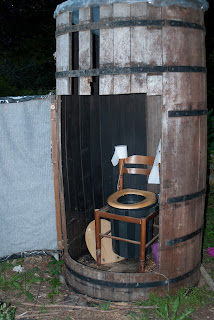 Above:  Dry toilet in a barrel. 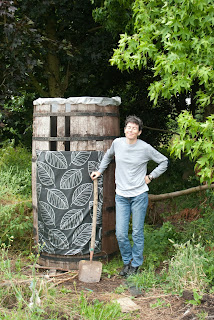 Above:  Laura proudly posing next to the dry toilet in a barrel.  The first visitor to happily use it.
I initially used sawdust donated by a local saw mill to add to the little gifts left in the bucket but a visiting carpenter pointed out that there was a strong smell of petrol emanating from it.  He explained that there is lot of oil/petrol that would have leaked into it during the sawing process.  What a shame - I had already filled two pallet bays with my contributions and was looking forward to spreading the end result around fruit trees in a few years.  I now get sawdust shavings from this carpenter that has no oil/petrol in it.
As a temporary mesure it is quite a novelty but I still haven't got used to emptying the contents into the compost bays (constructed out of palletes stuffed with straw to keep curious animals at bay).  I like the idea of recycling the waste but there must be a more pleasant way of dealing with this .... research to be done ... to be continued.﻿
Posted by Liza Sweeting at 12:52