The Formabois students had completed the onerous task of removing the reinforced concrete that had been applied in a thick render on the north side of the house. They managed to bash out two panels in the space of 5 minutes while it had taken me 3 or 4 days of intermittent work with a breaker (martoburineur) which always leaves me feeling completely exhausted the next morning. Most of the upright wood which supported the torchis underneath had rotted and so I removed them.  The choice for me was either to replace these uprights and re do the torchis or to find another solution.  I opted for the 'terre paille banché' method (a mixture of slip and straw packed into a boarded space) to create an external wall and internal insulation of a thickness of 30cm (any thicker than this and it would not dry with the risk of the straw rotting).

Actually as it turns out, it is a long long tiring process.  Ideally a team of people are required.  The cost is just 2 euros for each bale of hay - otherwise the earth is free - just 'huile de coude' as they say - elbow grease.  My friend Kevin, who is staying here at the moment, and I have got into a rhythm - we do at least an hour every evening.  The pictures below show the process: 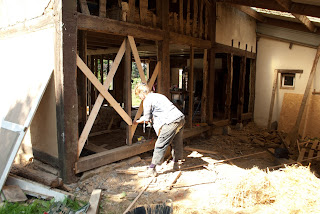 Above:  I screwed some thin planks into the space which will help to hold the straw and earth mix in place﻿ 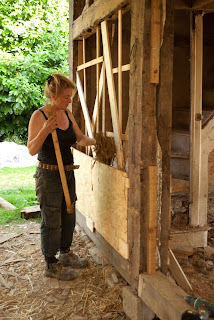 Above:  I used OSB board on either side and using a stick, packed down the straw and slip mixture which had been left to drain on pallets for 24 hours.﻿ 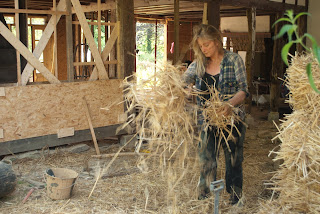 Above:  Sprinkling the straw onto planks ready to mix with the slip mixture.﻿ 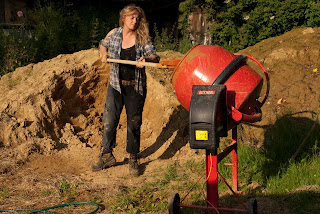 Above:  Shovelling earth into the concrete mixer with water to create a slip﻿
Posted by Liza Sweeting at 14:41