Starting to work on the house

Ok - ecoconstruction course finished. Now it's time to work on the house and put into practice all that I have learned.

Concrete was considered the new wonder material and was liberally applied to old buildings which has had disastrous effects.  The previous owners of my house put down concrete floors and applied thick reinforced concrete renders to the earth walls.  They also covered the lower wooden beams with concrete which has rotted them to almost nothing in places.  I have spent enormous amounts of time and energy breaking up the concrete in this house.  Concrete doesn't let water vapour pass which results in humidity being trapped in the walls which rots the wood and generally creates humidity.  Concrete floors encourage water from beneath the building to travel sideways and up the house walls.  It all has to go: 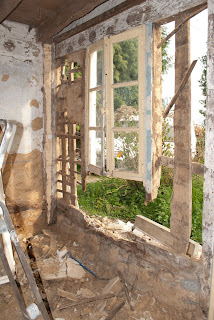 Above:  Once I had removed the brieze blocks and concrete from under the window, there wasn't much left - the concrete had rotted the beam above the low wall.
The picture below shows one of the rooms before I tore everything down.  The polystyrene insulation had created humidity in the walls as had the concrete floor.  The wallpaper was plastic.  I pulled down the ceiling to reveal the wooden beams and the wallpaper and insulation to reveal the earth walls and wooden wall beams which were wet in places. 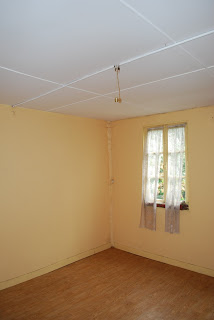 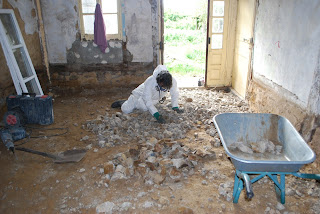 Above:  This is what this room looked like after breaking up the concrete floor and taking down the polystyrene walls.