I spent many months working as a wwoofer on organic projects mainly in Normandy and Brittany but also as far away as Perigord in the South of France and Northern Spain as a means of researching ideas for creating my own project and as a way of learning French - an essential prerequisite for living here.

Pedz and Karen had bought a large woodland in Northern Spain.  Pedz, a green woodworker/yoga teacher had spent the winter in a yurt that he had constructed himself using the wood from his woodland.  He had spent time in the UK honing his skills with Ben Law before moving out to Spain with his partner Karen who had studied environmental science to masters level.  She had become increasingly frustrated with acadaemia and felt it was time to put her ideas and principles into practice.  The idea was to create a permaculture site with yurts, organic gardens and a susainable woodland with the possibility of running courses in the future.  The couple had experimented with communal living in a nearby eco-community but had become increasingly frustrated with the obligatory group meetings and had decided to go it alone. 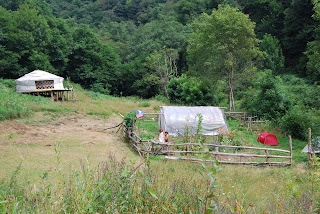 Above:  The yurt that Pedz built and the beginnings of a potager.  The open area was covered in brambles when they first arrived. 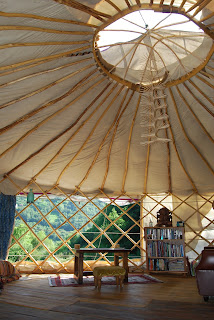 Above:  The yurt built with chestnut poles and floorboards that were planed from logs from the woodland

I then visited an eco-community in the Catalan mountains in Northern Spain where I met a woman who had authored a book 'Handbook for changing the world'.  A fabulous setting with organic gardens, an orchard, a woodland and woodwork studio.  The land had been made available to them by means of a trust set up by two sisters who wanted to support sustainable development projects.  There were working groups for each of the different work areas and decisions were made by consensus.  I detected a hint of cynicism as we were given a quick tour - a reflection of the perhaps inevitable tensions that must arise when groups of people come together to create a shared project.  A visiting group of anarchists had ransacked what was originally an old chapel and the vegan element were lobbying to get rid of the chickens that provided some of the residents with eggs. 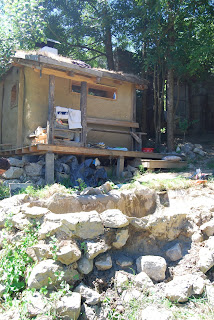 Above:  A sauna built by the communards and volunteers using mud and recuperated windows. 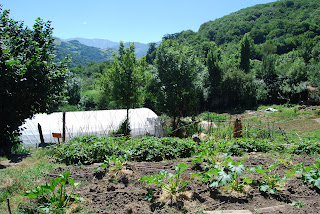 .Above:  A view over the organic food garden to the foothills beyond 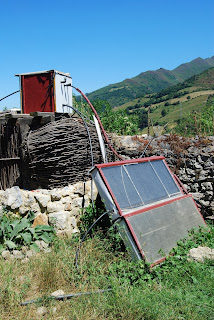 Above:  A solar shower built with recuperated and recycled odds and ends

Next stop - a sort of community, again inspired by the principles and practices of permaculture, in the Perigord region of the south of France.  The land is owned by someone who was absent at the time of my visit but who had invited/allowed a number of people to settle there.  There was a young woman with seven children who all lived in a yurt.  Her partner had recently run off with a young wwoofer leaving her in a depressed and uncertain state.  There was a lady in her 60s who had spent several years constructing a solid walled yurt and who had invested money in trees and time in the creation of a food garden.  The other members all wanted her to leave as she had become overly grumpy.  There was an assortment of self built huts scattered around the land. 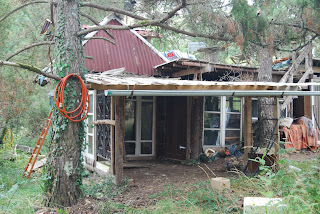 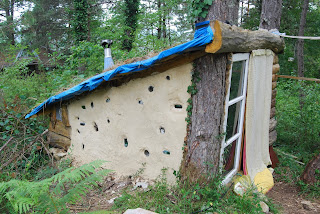 Above:  Two of the shelters that had been constructed with recycled bits and pieces and materials from the land.﻿ 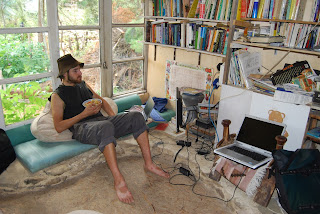 Above:  A wwoofer taking a break from surfing the net.  It was a novel experience for me to be in a place built with recycled materials - a place where there was evidently a lack of money, yet the residents all had computers and regularly surfed the net. 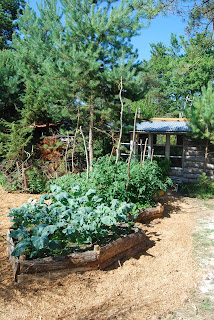 Above:  Raised beds in the food garden.
Ferme d'Escures - Environmental Education Centre in Normandy, France
An environmental education centre near Vire in Normandy that hosts groups of children who visit for the day to do a range of activities from feeding farm animals to making bread. The owner worked a 20 hour day for little or no financial gain to cook, animate and organise events and visits to the farm.  Memorable events from my time here include learning to harvest and cook with wild plants﻿ and helping to implement an educational nature trail.
Posted by Liza Sweeting at 14:57