Testing the earth for an exterior render

The east wall of the house was covered in an old lime render that may or may not have had some cement in it. 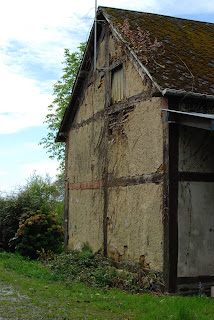 Above: The old render

At least it was east to remove - unlike the walls on the north side of the house that are thick reinforced concrete.  I replaced some of the horizontal wooden slats that were rotten or missing and then did some tests with the earth, sand and chopped up hay that I found in the barn here to see which combination would work well for a render - it was just a case of filling in areas where there was not enough torchis left. There is not enough space for the traditional lime render of 2cm and in any case I like the natural colour of the earth. 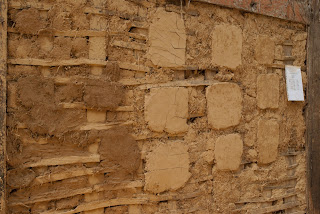 Above:  Top left is pure earth.  I added increasing amounts of fibre across the top and of sand in the vertical plane.  After a few days, there were only two samples that hadn't cracked.

So I decided on a mix of one earth for one sand for one fibre.  Having visited a similar project nearby where the mixture had included chopped up straw, I have decided to do this as well - the bits of straw give an interesting texture and shine - also I will apply it by hand to give a more organic look rather than a smooth flat look that you would get with tools.  So - how to chop up the straw. I have bought a strimmer and I will put straw in a plastic bucket and strim it into pieces.  You can use a chainsaw or lawn mower.  Perhaps I will try them all. 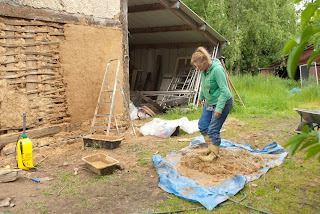 Above:   Before doing the tests, I had mixed up the earth, sand and hay by feel.  I trod the mixture on a plastic sheet before applying it to the wall. 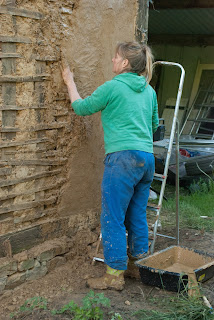 Above:  Applying the mixture to the walls by hand.  I sprayed the wall with water  before starting and also splashed a mixture of slip onto the wall to help the render sticking.
Posted by Liza Sweeting at 12:13