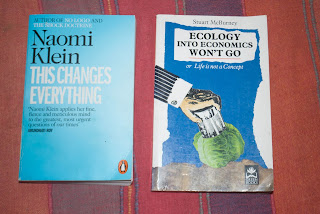 I'm having an intensive reading time - giving my muscles and joints some time to rest while feeding my brain with new ideas ....

Naomi Klein 'This Changes Everything'

"Our Economic model is at war with the world"

I would recommend Naomi Klein's 'This Changes Everything'.  An incredibly readable book.  It is rare for me to read a book from start to finish without stopping to read other stuff .... she writes in a passionate and engaging way about many of the issues around climate change ... much of it shocking and saddening but it is not without hope.  The big question being how to tackle the seemingly unstoppable momentum of the fossil fuel extraction companies who have 10 year plans in place while experts are telling us that we are dangerously close to the 2 degree global warming limit .... as she puts it 'POLICY MAKERS NEED TO SAY NO TO THE FOSSIL FUEL INDUSTRY';

"Fundamentally the task is to articulate not just an alternative set of policy proposals but an alternative worldview to rival the one at the heart of the ecological crisis - embedded in interdependence rather than hyperindividualism, reciprocity rather than dominance and cooperation rather than heirarchy ..." p462

I WOULD RECOMMEND WATCHING THIS:

Interesting book - written a while ago now (1990).  Some useful ideas for understanding the origins of our capitalist economic system and why its driving force runs counter to the idea of living within the limits of the earth.  He has much to say about the idea that landownership and inequity are at the heart of the problem.